Singer-songwriter William Fitzsimmons is due to unveil a brand new album next month, entitled ‘Lions’.

The record is due to be released on February 24 and will act as the follow up to 2010’s critically acclaimed cut, ‘Gold in the Shadow’. Fitzsimmons explained that ‘Lions’ is a body of work that he is incredibly invested in:

“The last couple of years have been… full (kind of difficult to describe year in a single word). They have been wonderful, painful, long, incredibly brief, and more educational and rewarding than any I’ve ever lived before. ‘Lions’ is something I’m terribly proud of and utterly connected to.”

Fitzsimmons will return to the UK in March for a couple of live dates and will perform at Brighton’s Komedia on March 6 before playing a set at The Garage in London on March 7.

During a recent interview with Speakeasy, Fitzsimmons explained that despite becoming a new father he didn’t want his new album to be centred around parenthood: “I didn’t want to make a nursery rhyme or an I-love-my-kids-they’re-awesome record, for two reasons: if you have kids, you don’t need to hear any more about that. And if you don’t, you don’t give a…”

Arctic Monkeys debut ‘Snap Out Of It’ video 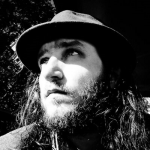