Earlier this year, landlord, Shaun Jackson beat off stiff competition from pubs across the country to win the coveted Music Makeover prize; £10,000 to transform The Railway Inn into a vibrant live music venue.

According to the British Beer and Pub Association (BBPA) a typical pub adds £80,000 each year to its local economy and research published by PRS for Music shows that music can help boost sales by nearly £100,000 a year. As 80% of pubs are small businesses, live music spaces not only provide not only a hub for the community but a vital source of revenue for licensees too.

This is from the Music News newsdesk

Leicestershire has a strong musical pedigree and is home to over 500 PRS for Music songwriters and composers. The region lays claim to a number of celebrated icons such as Queen’s John Deacon, multi-award winning kings of the live stage, Kasabian, Basement Jaxx’s Felix Burton, indie rock band Cornershop and legendary record producer, Trevor Horn.

With a string of top 40 singles to their name, Young Knives are Leicestershire’s latest success story. They’ve attained critical success with no less than four albums and a Mercury Prize nomination. Young Knives recently released their fourth album, Sick Octave, with rave reviews and will be playing Glastonbury Festival this month fresh from their tour with The Flaming Lips.

Henry Dartnall from Young Knives said: ‘We toured the local pub and club circuit for years. The grassroots scene is where everyone starts out and these venues are a crucial stepping stone in any artist’s career. Leicestershire will always be our spiritual home so it’s an honour to be here today as The Railway Inn opens its doors to local songwriters and bands. 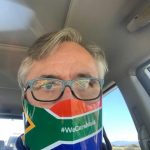 From The Nation of South Africa: Water resistant ‘Barrier Face Masks’ are being produced by one of South Africa’s Largest Print Management companies, Complete Print.