The Scottish DJ released the lyric video to his new single My Way on Friday morning (16Sep16) and many fans have interpreted the song, which features the heavily repeated line, “You were the one thing in my way” as a dig at his ex Taylor, who he split from in June (16) after more than a year.

The track, which features Calvin’s own vocals, opens with the lines, “Why wait to say, at least I did it my way? Lie awake two faced, but in my heart I understand… I made my move and it was all about you and now I feel so far removed. You are the one thing in my way.”

Fans took to Twitter to suggest he had “pulled a Taylor Swift” by using music to express feelings about past relationships, and in an interview with iHeartRadio on Thursday (15Sep16) he played it coy by saying it “could” be about a romance.

“(The) song’s kind of about breaking out of a situation that you thought was a good thing,” he explained. “Then you’re way more comfortable out of it. And it could be anything. It could be a job or it could be a relationship.”

However, he appeared to dispel the rumours by adding he had been working on the concept for a couple of years but didn’t know how it should sound until recently.

Shortly after their split, Taylor began dating British actor Tom Hiddleston and Calvin, who kept a low profile for weeks, eventually blasted Taylor on Twitter over the song credits on their song This is What You Came For after she revealed her involvement, despite previously choosing to keep her input a secret.

He recently told British GQ he snapped because he was “succumbing to pressure” of being in the spotlight and wanted to protect his talent, which he felt was being belittled. 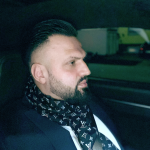 Featuring standout House elements that will prove enticing to a broad spectrum of Electronic Dance Music fans, The rising ‘RMA’ rocks floors with ‘Rock This Town’