Kyan Blackwood releases debut album “Freedom Because” featuring Ronald Bruner Jr, a drummer with extensive credits from Motown to punk rock, including recently with Prince in the Dakota Jazz Club.

The breakthrough debut album from Kyan Blackwood is entitled “Freedom Because” and features his recent first single “Moving On”. Kyan lives by the moto: “Lets not fight and create a new world instead”.

His music can be described as pop/rock with electro/rock and influences include Depeche Mode, The Jam, T-Rex, Marilyn Manson, Lady Ga Ga and Mozart.

Kyan Blackwood originally hails from France but now lives between Los Angeles, Brighton and London. He performs regularly across Europe. As well as singing and songwriting he still works as a make-up artist. Vincent Fournier is his make-up manager as well as lyricist and producer.

Fournier and Blackwood created the songs for “Freedom Because” and Ryan recorded at Titan Music Inc Studios (Madonna, Anastasia, Michael Jackson). Kyan said “It was very refreshing and exciting to work with Ronald Bruner (Prince’s drummer).

Kyan Blackwood’s debut single “Moving On” is released on 5 May 2014 on Jaywalker Records followed by the full length album “Freedom Because” on 26 May 2014. The single comes with a Club remix from Pimen.

80s legend Paul Young recently had Kyan as his support act on the big outdoor mainstage at the Blue Bell Hotel in Bridlington, Yorkshire. 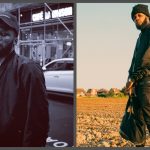